South India Travel Tour is the 13 days popular south tour package which covering Tamilnadu, Kerala, and Karnataka. Visit the ancient town Mamallapuram or Mahabalipuram, the temple town of Kanchipuram, followed by Tiruchirapalli or Trichy, Thanjavur or Tanjore, the temple town Madurai, the jungles of Periyar, Kochi with a Jewish synagogue, Garden city Bangalore, Mysore with magnificent palaces, temples of Belur & Halebid and Sravanbelgola. Continue to Chennai or fly out from Bangalore. 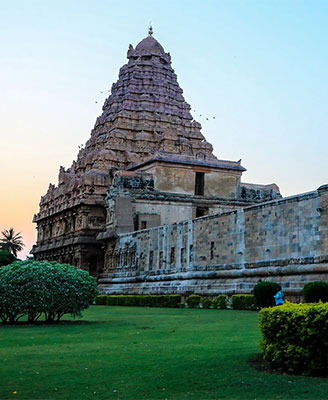 On arrival in Chennai, you will be transferred to your hotel. The name Chennai was derived from Chennaipattanam, built by the English in 1639. The earlier name of Chennai was a short from of Chennai pattinam a fishing village. Chennai is the capital of Tamil Nadu and is the largest industrial and commercial center of South India and also an important centre for Carnatic music. The city is also famous for the Tamil movies and known as Tollywood. Chennai came into prominence because of the British who defended the town against several attacks from the French and converted it to a major naval port. Chennai has numerous places of interest and beautiful museums. Rest of the day is at leisure or you have an option of Chennai sight-seeing. Your South India vacation starts from here. Overnight in Chennai.

In the morning, you will check out from your hotel and proceed for a visit of Mahabalipuram & Kanchipuram. Mahabalipuram or Mamallapuram is an UNESCO World Heritage Site and a historic town and seaport. It was an important port for the Pallavas and most of the monuments date back from the 7th to the 9th century. Kanchipuram was the ancient capital of the Pallavas and was the town of a 1000 temples. Kanchipuram sight-seeing takes you through some of the known temples such as Shiva temple from the 7th century, Ekambareswara temple, Sri Kailasanathar Temple from the 8th century, the Sri Vardaraja Perumal Temple, the Sri Kamakshiamman Temple, etc. Kanchipuram is a paradise for the shoppers as it offers the world famous Kanchipuram silk and saris. Mahabalipuram sight-seeing takes you through the cave temples and mandapams cut in the rocks showing depiction of incidents from Hindu legends, epics and mythology. The bas relief Arjuna's Penance with life size images carved on the rock wall is the largest Bas-relief in the world. The five chariots are carved out of a single rock. The twin structure of the Shore Temple is one of the oldest in South India and is worth visiting. Later in the evening, you will return to Chennai rail-station in time to board an over-night train for Trichy. Night on board.

In the morning, on arrival in Trichy, you will be transferred to your hotel. Tiruchirapalli shortly referred as Trichy is located at the banks of Cauvery River and is the fourth largest city of Tamil Nadu. This city was the citadel for the Cholas and was developed by the Nayaks of Madurai and is an eminent city as it is known for its scholars of Tamil. One can feel the holiness of this city in every occasion that get celebrated over here with great grandeur and pomp. The afternoon tour will take you to the Danish Church, Rock Fort a temple complex and a fort built on a rock with 434 steps to reach the temple of Lord Ganaesha and more for the temple of Lord Shiva. This fort complex had witnessed the fierce battles in between the Bijapur and Madurai Nayaks, Marathas and Carnatic forces. It has been said that this fort plays huge role at the time of Carnatic wars that helped in the foundation layout of British Empire. Overnight in Trichy.

This morning, you will be driven from Trichy to Tanjore also known as Thanjavur. Thanjavur was the capital of the Chola dynasty. Tanjore is famous for the Tanjore paintings and Bharatanatyam a form of classical dance which originated from this land. The Brihadeeswara Shiva Temple which is an UNESCO World Heritage Site was built by King Raja Raja Chola in the 11th century AD. The temple is capped by a monolithic cupola made of a single granite block weighing 80 tons which was taken to the top with the help of a 6 km long ramp, an old technique used by the Egyptians for building pyramids. The walls are covered with paintings from the Chola and Nayak periods. The other places of interest are the Thanjavur Maratha Palace constructed by the rulers of Thanjavur, the Saraswati Mahal Library with more than 30,000 manuscripts written on palm leaf and paper and the Raja Raja Chola art gallery with a huge collection of stone and bronze idols dating back from the 9th to the 12th centuries. After Thanjavur sight-seeing, you will be transferred to Madurai by road. Overnight is in Madurai.

Madurai is one of the oldest living cities in the world and the recorded history dates back to 3rd century BC. The entire morning is for a tour of Madurai. Madurai sight-seeing includes Meenakshi Temple, Tirumala Nayak Palace, Alagar Hills and Tirupara Kundran Rock temple. The Meenakshi Temple complex is one of the largest and oldest in India. The temple was built 2000 years ago and was expanded till Thirumalai Nayak. This is a temple of Lord Siva and his wife Meenakshi. The temple has a Hall of Thousand Pillars with every pillar showing life like features. The outermost corridors have musical pillars of stones which when tapped, produce different musical notes. Thirumalai Nayak Palace was built in 1636 by the king Thirumalai Nayak and is famous for its domes and arches. Afternoon is free in Madurai the temple town. Overnight in Madurai.

In the morning, you are transferred from Madurai to Periyar National Park also called Thekkady. Periyar is famous as an Elephant and Tiger Reserve and shelters various animals like Bengal Tiger, Indian elephant, wild boar, sambar, tiger, leopard, wild dog, langur, monkeys, etc. It has an abundance of birds and plants. A boat ride in the Periyar Lake gives you the possibility of watching the different animals The Park is surrounded by various plantation regions for coffee, tea, etc. and a visit to these plantations is a worth. If time permits, you could make a soft trek to the nearby areas. You have free time for selecting any of the above activities. Overnight in Periyar.

This day, you will be driven from Periyar to Kochi. Kochi earlier known as Cochin is referred as the Queen of Arabian Sea. Kochi has remained the popular centre in across the world for the trade of spices for number of centuries. The name of the city comes from Malayalam term Kochazhi that actually means small lagoon. Kochi was put on the world map by Vasco-de-Gama. The Arabs, Portuguese, British, Dutch, all have left their impression on the history of Kochi. After Mumbai, Kochi is probably the second most important city on the west coast of India. In the evening, you could visit a Kathakali dance show. Overnight in Kochi.

During the morning city tour of Kochi, you will be taken to some of the renowned spots of Kochi that will include the Portuguese churches, mosques and temples along with the Jewish synagogue. You will be taken to watch the Chinese style fishing nets which are mostly seen in Kerala. It holds around 10m of height and consists of cantilever along with an outstretched net that is suspended in the sea and one huge stone suspended on other end with ropes for the counterweights. Every installation of this fishing-net gets operated by group of six fishermen. You have a free time in the afternoon. You could visit the other popular destinations of Kochi like Kochi Fort, Hill Palace, Marine Drive, Jawaharlal Nehru Stadium, Kochi International Marina, Cherai Beach, etc. Overnight in Kochi.

This day, you will fly from Kochi to Bangalore. On arrival, you will be driven directly from the Bangalore airport to Mysore, also called as Mysooru. Mysore is known as the city of palaces and quite famous for its Dussehra festival, was the capital of the erstwhile Mysore Kingdom. Mysore was ruled by the Wadiyars except for some time in the 18th century when Hyder Ali and Tipu Sultan ruled this place. The Wadiyars were great patrons of art and culture which benefitted the cultural growth of the city, due to which Mysore is called the Cultural capital of Karnataka. Overnight in Mysore.

This day, you will be taking a full day excursion to Belur & Halebid. Belur was the capital of Hoysala Empire and has one of the finest examples of Hoysala architecture - the Chennakesava Vishnu Temple which was built by king Vishnuvardhana in celebration of his victory over the Cholas in the 12th century. It took 103 years to complete the temple and sculptures include elephants, lions, horses, stories from the Indian legends and dancers. Halebid or Halibeedu meaning the Old City was also known as Dwarasamudra and was the capital of the Hoysala Empire in the 12th century. In front of the Hoysaleshawara and Kedareshwara temples there is a big lake - Dwara Samudhra which means entrance of the ocean and the city derives its name from this lake. The walls of the temple are covered with depictions of Hindu mythology, animals, birds and dancing damsels. The sculptures of the temple are different from each other and there is a museum in the complex. Even after 86 years of work, the Nandi Bull was incomplete. The nearby Jain temples are also quite beautiful. Return to Mysore visiting Sravanbelgola enroute. The Gommateshvara Bahubali statue of this city is renowned, popular and an important pilgrimage spot for Jains. This statue is very huge and can be seen from a distance. When the statue is bathed with honey and milk, it attracts thousands and thousands of worshippers from all over the world as this ritual happens once in 12 years. Overnight in Mysore.

The morning city tour of Mysore will take you to the Mysore palace that was originally built by the Maharaja of Mysore in the year 1911-1912. The palace is of harmonious synthesis of the Hindu and Saracenic styles of architecture having archways, domes, turrets, colonnades and sculptures. Visit the art gallery. Drive to the Chamundi hill to visit the Chamundeshwari Temple. From the hill itself you will get a panoramic view of the city of Mysore. On your way back to Mysore, visit the Nandi bull. Afternoon is free in Mysore or you could visit the Krishnarajasagar dam and the Brindavan Gardens. Mysore is a good place for buying the famous "Mysore silk". Overnight in Mysore.

You will be transferred to Chennai airport in time for your return/onward flight. END OF YOUR SOUTH INDIA TOUR PACKAGE.