If you have the zeal to travel and explore the land of luxury, culture and riches and see incredible monuments in India, then it is best to opt for the 14 days Central India Tour Package. The grandeur and magnificent style of the Indian Kings is reflected in the splendid palaces, monuments and forts they constructed during that period . Central India Tour Package covers all the major cities which are famous tourists’ destinations. Staring from New Delhi, the cosmopolitan capital city of India it takes you across Agra where you will witness the incredible beauty of Tajmahal, the fort and museums in Gwalior,and amazing sculptors in temples of Khajuraho, and Orchha and ancient stupas in Sanchi. The Central India Tour Package takes the tourists across famous UNESCO Heritage monuments and explore this country blessed with immense scenic beauty, ancient Ajanta and Ellora caves and amazing historical bequests. The tour ends in the financial capital of India, Mumbai. 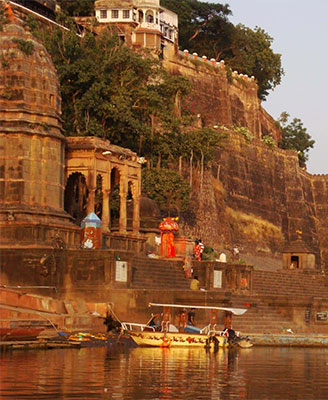 On your arrival in Delhi, you will be greeted by our representative and transferred to the hotel in an air-conditioned car. Delhi's cultural landscape has been influenced by many different rulers .The city boasts of beautiful monuments and forts. The diverse Indian cultures and traditions are revealed in an amazing fusion in this metropolitan city of India. There are a slew of extremely wonderful tourist spots ranging from beautiful cultural sites like India Gate, Jama Masjid, historical monuments such as Qutab Minar , Hamayuns Tomb, to towering high end malls to bustling local markets of Chandni Chowk to other contemporary architectural wonders such as Akshardham Temple, Lotus Temple, Museums , Parks and planetariums. Old Delhi is an interesting maze of small lanes and old buildings and New Delhi has modern infrastructure. In the morning drive past Raj Ghat, iconic Red Fort and Chandni Chowk, and Jama Masjid, one of the historic and largest mosques in India. Enjoy thrilling rickshaw ride in Chandni Chowk, which is virtually a shopper's paradise.

Early after breakfast drive to heritage city of Agra which is a major tourist destination. On reaching, check in the hotel. In the afternoon visit inimitable Taj Mahal, the beautiful ivory white-marble mausoleum which is considered to be the epitome of love and romance .The outstanding architecture, dramatic appearance of the Taj highlighted by intricate carvings and artistic inlay work, enthralls the tourists. The incredible craftsmanship and attractive design leaves the tourists spell bound making your trip memorable. Agra is home to several other historical places, such as Agra Fort, Fatehpur Sikri, Kinari bazaar, Tomb of Itimad Ud Daulah JamaMasjid. Overnight stay in Agra.

In the morning, you will be taken by road from Agra to Gwalior. The distance between the two places is 120 km approximately and it takes nearly 2 hours 25 minutes to cover this distance. Check in the hotel in Gwalior, which is a historical town famous for the sacred temples, wonderful palaces, and ancient monuments. In the afternoon, proceed for sight-seeing tour Visit , Gwalior fort standing majestically on an isolated rock,16th century Man Singh Palace, Jai Vilas Place museum built in European style of architecture with blend of Italian and Tuscan style, the Gujari Mahal and Sun temple made of red sandstone. Overnight stay in the hotel.

After early breakfast proceed by car to reach the next destination Orchha nestled on the banks of river Betwa, covering a distance of 173 km in almost 3 hours and 40 minutes Check in the hotel . Explore Orchha's grandeur and rich legacy which has been captured in stone as you see Rajamahal, Jahangir Mahal, in the brilliant architectural style Orchha fort. Visit Chattris and see the history reflected in its pristine glory preserved over the ages . The town has numerous temples and tombs. Visit Laxmi narayan temple. Adventure enthusiasts can do river rafting on the river Betwa or go for Jungle safari at Orchha wild life Sancturay The airconditioned car is at your disposal with-in the city limits. Overnight stay in hotel is in Orchha.

In the morning after breakfast leave by road from Orchha to Bhopal as you cover a distance of 334 km in nearly 6 hours 15 minutes. On reaching check in the hotel and relax .Bhopal is also known as the City of Lakes. The city is an amazing blend of Islamic and Hindu cultures and exhibits fusion of South Indian and North Indian tradition. Visit Laxmi Narayan Temple, Birla Museum, Moti Masjid and Taj-ul-Masjid which is one of the largest mosques in Asia Drive through Vidhan Sabha, National Archives and the Tagore Memorial. Explore the local markets of Bhopal for shopping for the traditional artifacts. The transport is at your disposal with-in the city limits. Overnight stay in the hotel in Bhopal.

Have early breakfast and embark on a full day excursion tour. Reach Bhimbetka after covering a distance of 45 km in nearly 1 hour 10 minutes and see its amazing 243 Bhimbetka rock shelters which are an UNESCO World Heritage Site. Some of the paintings depicting peacock, snake, tigers, elephants, and human figures made on the inner walls or in deep niches of rocks are than 30000 years old. Proceed to visit Sanchi locate at a distance of 89 kms which is covered in almost 1 hour 50 minutes. Visit its Stupas one of the oldest and magnificent stone constructions in India which were built by Ashoka the Great and see the amazing Buddhist architecture and art reflected in monuments and temples. The transport is at your disposal with-in the city limits. Get back to Bhopal in the evening. Overnight stay is in hotel in Bhopal.

Take breakfast and proceed by road from Bhopal to Indore. The distance between the two destinations is 193 km and it takes nearly 3 hours 28 minutes to cover the distance. Enroute visit Ujjain an ancient sacred city of Hindus also known as Avanti Situated on the banks of the Shipra River. Visit one of the five Observatories with astronomical devices. Ujjain is home to one of the twelve Jyotirlingas - the Mahakaleshwar Jyothirlinga. Visit The Mahakali Temple which is one of the 51 Shakti Peeths, Kaal Bhairav temple , Mangalnath Mandir, Raja Bhartuhari cave, Harsidhdhi Mandir, Ram ghat and the Observatory, etc. The transport is at your disposal with-in the city limits. Leave for Indore. On reaching check in the hotel .Overnight stay is in Indore.

In the morning get ready for an interesting excursion to Mandu known for its fine architecture and rich history. Visit this ancient military outpost with 37 km battlemented wall and 12 gateways housing palaces, mosques and temples.Visit Jama Masjid 1405 AD with Pashtun architecture is the oldest mosque and Jahaz Mahal which is a palace but it appears as a floating ship and Hindola Mahal built by Hoshang Shah in the 15th century from here. Other places of tourist interest are Rewa Kund which is a reservoir, Roopmati's Pavilion and Baz Bahadur's Palace. The transport is at your disposal with-in the city limits. Overnight stay is in Indore.

After breakfast take a short tour of Indore. Take a short tour of Indore and uncover its rich cultural heritage. Visit, Rajwada Palace, which exhibits an amazing fusion of Maratha and Mughal architecture. Also see Lal Bagh Palace. Kaanch Mandir and Indore Museum and see interesting historic artifacts. Visit Annapurna temple and Indore Zoo, which is home to white tigers, Himalayan bear, etc. The transport is at your disposal with-in the city limits. In the afternoon depart by road from Indore to reach Jalgaon, which is at distance of 283 km. Check in the hotel and Overnight stay is in Jalgaon.

After breakfast, travel by road from Jalgaon to Aurangabad. Enroute visit the famous Ellora Caves dating back from 5th century to 11the century and see the monasteries and temples. The 34 caves of Ellora feature incomparable Buddhist monasteries, Hindu temples and Jain temples. Visit outstanding Kailasa Temple, which is the largest monolithic structure in the world. Ellora caves are closed on Tuesdays. The distance between jalagaon to Ellora is 173 km and it takes 4 hour 10 minutes to cover this distance .The transport is at your disposal with-in the city limits. . Leave for Aurangabad located at a distance of 30 km . On reaching Aurangabad Check in the hotel for overnight stay .

After breakfast proceed for an exciting day excursion to visit the outstanding Ajanta Caves, which are amazing 30 rock-cut Buddhist cave monuments dating back from the 2nd century. The sight-seeing trip takes you to the Buddhist Chaityas and Viharas with beautiful intricate carvings and unbelievable wall paintings. The wonderful mural paintings reveal the life and rituals prevalent during Mahayana Buddhism period. The ceilings are also painted with wonderful decorative motifs .some of these pictures represent the Jataka tales exhibiting the previous lives of Buddha as a ruler. Ajanta Caves are closed on Mondays. The transport is at your disposal with-in the city limits. Overnight stay in the hotel in Aurangabad.

After breakfast if time permits, take optional tour of Aurangabad. Visit Bibi Ka Maqbara also known as the Baby Taj, Panchakki, Kali Masjid, Jumma Masjid, Quila-E-Ark, and Aurangabad Caves. Visit the local market for some interesting shopping spree as you buy Himroo shawls, or Paithani saris or fabrics like Kimkhab. Later you will be transferred to the Aurangabad airport in time for your Mumbai flight. On arrival in Mumbai you will be transferred to your hotel. Overnight stay is in Mumbai.

In the morning take a tour of the city of Mumbai in an air-conditioned car. Mumbai is also known as Bollywood .This vibrant city is known for its amazing sky scrapers, multi- brand shopping malls, clubs, pubs, fashion shows, vast stretches of Zuhu beach, well lit Marine drive and the Gateway of India. Visit Hanging Gardens located on the beautiful slopes of the Malabar Hills and expansive Kamla Nehru Park from where you can enjoy a captivating and panoramic view of the famous Chowpatty Beach and the Marine Drive. Continue to visit Mani Bhawan, Prince of the Wales Museum, Gateway of India and Dhobi-Ghat .Drive through the curvaceous Marine Drive, Flora Fountain and the bustling Crawford market. Check-out from the hotel will be at 1200 hrs. Later in the evening you will be transferred to the airport in time for your return or onward flight. Take the fascinating and fabulous Central India Tour Package and take back wonderful memories of this dream holiday, which you will cherish all your life.