Haridwar, an exceptional pilgrimage city of Hindus is an entry to the 4 pilgrimage centers of Uttarakhand. Haridwar Rishikesh trip encompasses the tourist spots like asharms, several temples, Ghat of Har ki Paudi where Ganga aarti takes place in the early morning and late evening hours. Haridwar town is placed in the foothills of Himalayas and displays the point when the Ganga reaches the plains. Next on your tour is Rishikesh which is a city of saints and scholars. It is also famous all across the world as Yoga capital and there are several Yoga Ashrams where daily classes take place. You will come across cafes serving variety of cuisines for all the people who come from different parts of the world. 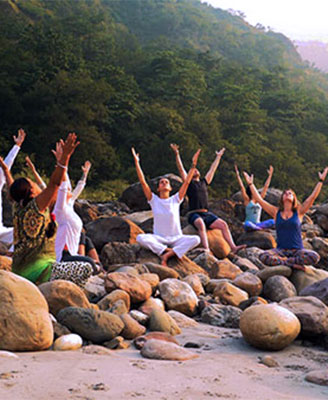 This morning you will be transferred by road from Delhi to Haridwar. Haridwar meaning Gateway to God is one of holiest places for Hindus. It is said that during Samudra manthan, drops of Amrit, accidentally spilled in four cities Haridwar, Ujjain, Nasik and Allahabad. Kumbha Mela takes place once every 3 years in one of the 4 places where millions of devotees participate to bathe on the banks of the river to wash away their sins and attain Moksha. Har ki Pauri meaning "the steps of God" is the place in Haridwar where the drops of Amrit fell. Haridwar is known for its Ashrams. It is said that after death, if the ashes of a person are immersed in the River Ganges, the dead attains Moksha. The rituals are normally done by the family priests. This afternoon you will be visiting the different places of interest in Haridwar. A family genealogy of Hindus for the past generations is kept by Brahmin Pundits known as Pandas. Hand written registers are passed down over generations by the Panda ancestors classified according to the districts/villages or castes. It is easy to find details of up to seven past generations. The Hindu ancestors who visited Haridwar went to their priests to update the family's genealogical family tree with details of marriages, births and deaths. If you are a Hindu, on your arrival you will be asked by numerous people about your caste and the place of your ancestors. Once this information is revealed, the word spreads quite fast among the Pandas and immediately you are contacted by your family priest to trace your ancestors. Once your register is found, you could trace your family. You are expected to sign the register after updating it for your future generations to see the authenticated entries. The transport is at your disposal with-in the city limits. Overnight is in Haridwar.

This day, you will be taking an excursion to Rishikesh which is an ancient pilgrimage centre in the foothills of the Himalayas on the banks of river Ganges. Rishikesh meaning "lord of the senses" or Lord Vishnu is a town on the shores of River Ganges. Rishikesh known as the world capital of Yoga is full of yoga centers and it is believed that you have a possibility of attaining Moksha if you meditate in this place. There are numerous temples in Rishikesh. The evening Ganga Arti at the Triveni Ghat is worth watching. Famous people like Swami Vivekananda, Swami Rama Tirtha and Swami Shivananda have studied at the Kailash Ashram Brahmavidyapeetham. The Beatles had stayed at the Maharishi Mahesh Yogi's Ashram and had composed numerous songs. John Lennon also had recorded the song "The Happy Hrishikesh Song" and numerous artists, like Mike Love, The Beach Boys, etc. have come here to meditate. Later return to Haridwar. The transport is at your disposal with-in the city limits. Overnight is in Haridwar.

Drive to Delhi. END OF THE TOUR.