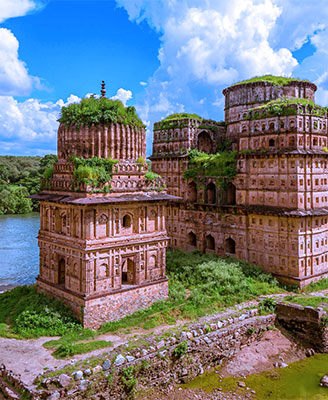 Arrive Jhansi. Drive to Orchha. You will be visiting Orchha in the afternoon. Orchha was established in the 15th century AD by Rudra Pratap Singh, the first king of Orchha. The Orchha Fort was also built by the same king. Orchha Fort consists of several constructions like Raja Mahal, Jahangir Mahal, etc. Raj Mandir was built by 'Madhukar Shah' during 1554 to 1591 AD and the Chaturbhuj Temple was built by Queen Ganeshi Bai. You could climb the roof of the camel shelter "Uth Khana" for a beautiful view of Orchha. This is where the camels of the kings were held. The Orchha town has numerous temples and tombs and the fort has plenty of cenotaphs. The transport is at your disposal with-in the city limits. Overnight is in Orchha.

Drive to Khajuraho. Your afternoon visit of Khajuraho will take you to the different temples. The Khajuraho sight-seeing will take you to temples like Chaunset Yogini Kali Temple, Bharatji or Chitragupta temple that is composed of magnificent 11 headed pictures of Lord Vishnu, Lakshmana Temple, Mahadev Temple, Nandi & Vishvanath Temples and Shivas Visha Temple. The Parasvanath Temple of Khajuraho is the only Jain temple that still exists. The Javeri Temple is dedicated to the Hindu Lord Vishnu. The other temples you can visit are dedicated to Lord Brahma, Lord Adinath and Yamuna.Overnight is in Khajuraho.

Transfer to airport to board flight for Varanasi. Arrive in Varanasi & transfer to hotel. The rest of the day is at leisure to discover the city or visit Sarnath. The evening Arti at the River Ganges Ghats is worth watching. Or a stroll in the busy bazaars of Varanasi also called Benaras or Banaras or Kashi will be quite interesting. Varanasi is said to be the oldest living city in the world, dating back to 5000 years. It has been the cultural and spiritual capital of North India for years. The belief of Hindus is that death in Varanasi leads to salvation. Varanasi is also known as the holy city of India or the city of temples, or the city of learning and also as the oldest living city on earth. Overnight is in Varanasi.

Your morning boat excursion on the river Ganges will take you to the different ghats. Two of most renowned ghats, Manikarnika and Harishchandra ghats, which are frequented by hundreds of devotees. These two ghats are quite famous not only for taking a holy dip, but also for cremation purposes. It is strongly believed by Hindus that whoever dies in Varanasi and gets cremated on bank of river Ganga achieves salvation, thereby releasing him from this birth cycle. You may witness numerous funeral pyres burning around in these ghats. Later you will be transferred to Varanasi airport in time for your flight. END OF THE TOUR.