08 days luxury train travel package "Golden Chariot - Pride of South". Witness the incredible age old charm of India as you embark on the Golden Chariot Pride of India tour. A visit to ancient Amba Vilas Mysore Palace reveals the splendid blend of architectural styles. Unearth the grandeur of nature as you take thrilling Kabini Boat rides to explore wild life reserve at Nagarhole and visit the sprawling ancient Srirangapatnam Fort built on a river bank. Discover the unique architectural spectacle of the legendry Jain monk Gommateshvara Bahubali. Visit the World Heritage sites at Hampi and Pattadakhal. You will be spellbound by the ancient of temples at Belur and Halebid carved out of sandstone hill. Discover the stupendous beauty of beaches of Goa and experience wonderful Portuguese culture in the churches. 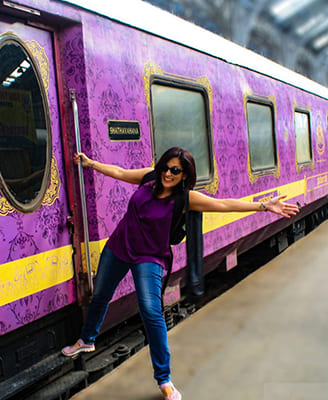 Arrival at Leela Kempinski. Lunch at the Restaurant of the hotel. Enjoy a city tour of Bangalore - city with its centuries old trees, sub tropical herbs and well laid out gardens. Visit the beautiful botanical gardens of 'Lal Bagh', the 'Nandi Bull Temple', the impressive building of the 'Vidhana Souda' (Secretariat). Continue onwards to the 'Palace of Tipu Sultan'. It was started by Hyder Ali and completed by Tipu Sultan. One of the three summer palaces built by the two Mysore rulers, it is made entirely of wood, except for the internal pillar supports. Within are gloriously painted walls, ceilings, balconies in red, black and gold. Bangalore has rapidly become an important industrial center and, has been nicknamed the 'Silicon Valley' of India. Depart from Yeshwanthpur railway station. Later in the evening arrive Mysore. Dinner & overnight on Board.

Morning drive to Nagarhole National Park. Kabini, a scenic delight was once the hunting lodge of the erstwhile Mysore Maharajahs. The steep valleys with rich forests, spectacular pools and rapids provide an ideal opportunity to revive your adventurous spirits. Lunch at Jungle Lodge. Enjoy the game safari in the National Park. Dinner and overnight on board.

Breakfast on board. After lunch on Golden Chariot, depart for sight seeing to Srirangapatnam by coach. Visit the beautiful city of Mysore that is known for its fine craftsmen ship in wood, ivory, sandal-wood and for its silk. Visit the Maharaja's Palace, which is lavishly decorated in a mixture of styles. Also visit the Brindaban gardens for Cultural Show followed by Dinner and Hotel KRS. Overnight on board.

Depart from Mysore to Hassan. Visit Sravanabelagola and the famous Jain Temple - famous for its colossal statue of the Jain Saint Gomateshwara. 614 steps lead to his monolithic statue 18 meters tall and standing atop the hill of Indragiri. Every 12 years Jains from all over India gather here for the spectacular bathing festival of the statue. After lunch onboard, drive through lush tropical landscapes to Halebid and Belur - Built in the 12th and 13th century in the superb baroque style, these temples are carved of stone and are truly magnificent. As one architect and critic said "These friezes carved with a minute elaboration of detail are one of the most marvellous exhibitions of human labour to be found even in the patient East". The temple at Belur is famed for its profusely ornamented exterior, and the one at Halebid for its sculptured figures and open-air museum. Also visit the colossal monolithic Jain statue, 57-ft high, which stands on top of a steep bare hill. Depart for Hospet. Dinner and overnight on board.

Arrive Hospet. After breakfast on board, depart for Hampi - A world heritage centre, Hampi is the most beautiful and evocative of all the ruins in Karnataka. The erstwhile capital of Vijayanagara kingdom, Hampi is full of delightful surprises. Like the King's balance where kings were weighed against grain, gold or money which was then distributed to the poor. The Queen's bath with its arched corridors, projecting balconies and the lotus-shaped fountains that once sprayed perfumed water, the two storied Lotus Mahal with recessed archways, the huge Elephant stables. After lunch on board visit the splendid Vithala temple with its musical pillars and the stone chariot, the Virupaksha temple - still used for worship, Ugra Narasimha the 6.7m tall monolith. The Pushkarini Tank & the Mahanavami Dibba & many other interesting sites that are still being excavated. Dinner and overnight on board.

Morning depart for Badami. After breakfast on board Arrive Gadag. Visit Badami Caves & Pattadakal. Visit Badami - once the former second capital of the Chalukya dynasty. Here the cave temples are hewn out of solid rock, in a magical setting of hills above a lovely reservoir. Pattadakal has 10 major temples representing early Chalukyan architecture. It lies on the banks of the river Malaprabha and used to be the place where the Chalukyan Kings (7 to 9 century) were crowned. The oldest temple in this group is the Sanghmeshwara. The Mallikarjuna temple has pillars depicting the birth and life of Krishna. The largest of the temples, the Virupaksha has sculptures and panels depicting scenes from the epics, the Ramayana and Mahabhararta. The Papanath temple in the northern style has impressive carvings on pillars and on the ceiling. Lunch onboard. Depart for Goa. Dinner and overnight onboard.

After breakfast, depart for sightseeing tour of churches of Old Goa. Visit an old Portuguese house: Sola Souto Maior for Tea/Coffee along with cookies and shopping at the emporium. Reach Majorda Beach Resort for Lunch. Dinner and overnight on board. Depart for Bangalore.