Get ready to experience the exotic tourist destinations of South India as you embark on The Indian Maharajah Golden Chariot. You can opt for eco or Artistic tour. Enjoy the drive around Marina beach and see a gamut of ancient monuments and temples at Mahabalipuram in Chennai. Saunter on the tranquil beaches of Pondicherry and visit Sri Aurobindo Ashram. Take a road trip to Tanjore to see the famous Brihadiswara Temple and Tanjore artifacts and Paintings workshop. Visit the old heritage city of Madurai to see the renowned Meenakshi Temple and enjoy live classical music concert. Stroll on the beautiful beaches of Kanyakumari and experience the magic of sunrise. Take a gripping houseboat cruise in Alleppey, and enjoy a scenic road trip to Kochi. 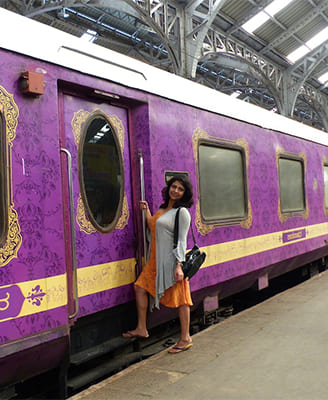 Meeting point at the Leela Palace in Bangalore at 12.00 hrs. After a good lunch depart for sightseeing of the metropolitan city of Bangalore. Towards the evening check In at the Bangalore Railway Station on your hotel train "The Golden Chariot" your comfortable home for the next week. Depart from Yeshwanthpur railway station. Later in the evening arrive Chennai. Dinner & overnight on Board.

Arrive Chennai this morning. After breakfast, enjoy an excursion to Mamallapuram (Mahabalipuram), an ancient coastal port, south of Chennai, world famous for its shore temple. The whole of Mamallapuram is a fabulous open-air museum of sculptures. The famous temples of the Rathas, the Penance of Bhagirath, the Shore Temple and the eight Mandapams. (Shallow, rock cut halls) are also located at the beach. Enjoy lunch at Mamallapuram. After lunch proceed to visit Chennai - India's fourth largest city, and is the capital of the state of Tamil Nadu. The tour begins from the 'St. Mary's Church', built in 1678 - 80, was the first English Church in Chennai. The Saint Thomas Cathedral, built in 1504, and then re-built in neo-gothic style in 1893, this Roman Catholic Church is said to house the remains of St. Thomas the Apostle. Also visit the Kapaleeshwarar Temple, an ancient Shiva Temple, constructed in pure Dravidian style. The Sri Parathasarathy Temple, dedicated to Lord Krishna, built in 8th century during the reign of the Pallavas. Also visit National Art Gallery and Museum. Drive past the High Court Building, Fort St. George and the famous film studios. Towards the evening return to the train and depart for Pondicherry. Dinner & overnight onboard.

Arrive Pondicherry this morning. After breakfast, visit Pondicherry: formerly a French colony settled early in the 18th century, Pondicherry became part of the Indian Union in the early 50's when the French voluntarily relinquished control. French is still widely spoken, and seaside villas and cobbled streets are more reminiscent of the South of France than the South of India! Sightseeing tour of Pondicherry includes visit to Auroville. Conceived as a tribute to Sri Aurobindo, Auroville is an entirely new concept in education and urban living. The Aurobindo Ashram is known to the world over as the "Centre of Integral Yoga". Depart for Tiruchirapalli. Dinner & overnight on board.

Arrival in Tiruchirapalli early in the morning. After breakfast visit Trichy (Tiruchirapalli) - Situated on the banks of the River Kaveri, just 320 kms from Chennai, Trichy was a Chola Citadel during the Sangam Age when the Pandyas and Pallavas held sway over this region for short periods. The most famous landmark is 'The Rock Fort Temple', a spectacular monument perched on a rock outcrop which rises abruptly from the plain to tower over the old city. Proceed for a sightseeing tour of Thanjavur (Tanjore) where you will visit temples built during the 10th and 14th centuries. These later became a part of the Vijaynagar Kingdom, which subsequently passed into the hands of the Marathas and went to the British. The most famous landmark is the Brihadeshwara temple, which is now a world heritage site. Depart for Madurai. Dinner & overnight onboard.

Arrive Madurai this morning. After breakfast, visit Madurai -an animated city packed with pilgrims, vendors, business people, bullock carts and legions of under employed rickshaw pullers. It is one of the Southern India's oldest cities and has been a center of learning and pilgrimage for centuries. Proceed for a sightseeing tour of Madurai - The primary interest is the Meenakshi Temple, where Dravidian temple architecture may be considered to be at its best. Its Hall of a thousand Pillars is fabulous and is filled with worshippers at all hours of the day. The tour also includes a visit to the - Thirumalai Nayak Palace & Thiruparangundram temple. Depart for Trivandrum (Thiruvananthapuram). Dinner & overnight onboard.

Arrive at Trivandrum (Thiruvananthapuram) this morning. After breakfast visit "The Padmanabhaswamy Temple", which, was constructed in the Dravidian style, by the Maharaja of Travancore in 1733. Only Hindus are allowed inside this temple. It has a 7 storey high tower with a curious pagoda - Shaped Peak. Later also visit the Napier Museum, housed in a bizarrely attractive, decaying Indo-Saracenic building dating back to 1880. Also visit the Sri Chitra Art Gallery, which houses paintings of the Rajput, Mughal and Tanjore schools. For lunch we continue to Poovar a beautiful island just off the coast of the Arabian Sea. Lunch in a nice hotel and time to explore the beaches. Evening Gala dinner with music and dance. Depart for Kochi. Overnight onboard.

Arrive Kochi (Cochin) this morning. After breakfast, visit Alappuzha, enjoy a traditional boat ride on the bewitching Vembanad lake, the largest backwater stretch in Kerala. Cruise to Kumarakom - a small backwater village, which is a cluster of islands, has a life of its own, with a slow, serene rhythm. The sights, sounds and fragrances will simply captivate you. After lunch at Kumarakom drive to Kochi. The tour of Kochi begins from "The Dutch Palace also known as Mattancherry Palace, built by Portuguese in 1555, which is famous for its murals depicting scenes from the Ramayana and the puranic legends. Adjacent to the palace is the Jewish Synagogue (closed on Fridays & Saturdays) built in 1568. Vasco Da-Gama was buried in the courtyard of this European church built in India. Other attractions include the traditional fishing hamlets and the fisher folk in their colourful costumes. Also visit the seaside where one can see the, nearly a century old Chinese fishing nets, which, are still in use. In the evening enjoy Kathakali dance performance followed by dinner. Depart for Bangalore. Overnight onboard.

Arrival at Bangalore in the morning. After breakfast departure to your next destination.