11 days Golden Triangle Vacation Trip is a well-known tourist circuit. It is called triangle as the cities of Delhi, Agra and Jaipur form a triangle. With this trip, one can realize the fascination of enriching culture and grandness. The Golden Triangle Vacation Holiday Packages are well designed keeping in mind traveler's interest. It is usually an 11-day trip which starts from Delhi. This tour covers some of the prime locations in India without which a trip to India would be incomplete. 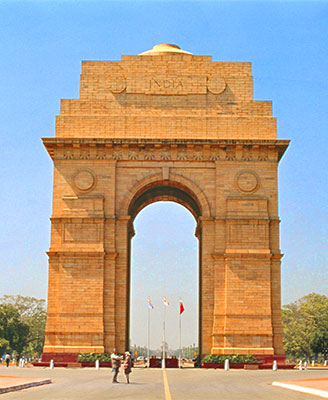 On your arrival in Delhi, you will be met by our representative and transferred to hotel. Delhi was the capital of Indraprastha and capital of the Pandavas during the Mahabharata. This magnificent city has been inhabited from the 6th century BC and has been a capital of many kingdoms. It has been destroyed and rebuilt many times and is called the "city of cities". Delhi's culture has been influenced by its different rulers and the city is full of beautiful monuments. The Mughal rulers influenced the food habits of the residents and Mughlai cuisine originated here. Due to the proximity of different states, all festivals are celebrated here. Old Delhi is a maze of small lanes and old buildings and New Delhi has large road with huge buildings. Delhi is the capital of India and is the hub for politics. Your tour starts with Old Delhi, built by the Mughal emperor Shah Jahan in 1639 AD. You will visit the Raj Ghat where father of our nation Mahatma Gandhi was cremated. You will be visiting the museum that was built to commemorate him. You will be driven past the iconic Red Fort and Chandni Chowk, a very popular and a busy market in Old Delhi to the next stop - Jama Masjid, one of the iconic, historic and largest mosques in India - built by Shah Jahan. A rickshaw ride in Chandni Chowk could be quite interesting as this part of the city is quite crowded as it is full of shops. These numerous shops sell delicious mouth-watering food, clothes, jewels, household goods, etc. and are virtually a shopper's paradise. In the afternoon, you will visit Qutub Minar, touted as India's largest Minaret. Qutub Minar, a UNESCO World Heritage Site, was built in 1192 by Turk ruler Qutub-Ud-Din Aibak. You will then move forward to Humayun's tomb, yet another UNESCO world heritage site. Your next stop is India Gate, built in memory of the Unknown Soldier. You will be driven past the Parliament House, President's House and other Government Secretarial Buildings, to your final destination which will be Lakshminarayan Temple, a temple dedicated to Lakshmi and Lord Narayana. Overnight is in Delhi.

Early in the morning, you will be driven to Jaipur. Jaipur, also known as the pink city is the capital of Rajasthan. Many captivating palaces are present here having breathtaking design and architecture. In the 18th century Prince of Wales had visited Jaipur and the entire city was painted in pink color and due to these pink buildings the city is known as the pink city. Origin of Jaipur lie 260 year back. It was built by Maharaja Jai Singh and Jaipur got its name from this king. The rest of the day could be spent visiting the Jaipur bazaars or walking down the crowded colorful streets. The transport is at your disposal for any additional visits of monuments or restaurants or places of interest which are with-in the city limits. Overnight is in Jaipur.

The morning journey starts from Amer fort also known as Amer Palace, the earlier capital of Jaipur. This magnificent fort was constructed in red sand-stone and marble by Raja Man Singh and is divided into four sections each with a courtyard. The main entrance gate is Surajpol having a fascinating architecture. Near the Ganesh Gate, there is a temple dedicated to the Goddess Sila Devi. The Diwan-e-Aam - hall of public audience, Diwan-e-Khas - hall of private audience, Sheesh Mahal - palace of mirrors and Sukh Niwas are quite beautiful. At the Sukh Niwas, a pleasant climate is created by winds that blow over a water cascade. You could ascend the fort by walking up the steps or on an elephant's back or in jeeps. In Jaipur you will be taken to Maharaja City Palace, a royal palace with seven storey as well as Jantar Mantar, the observatory. This wonderful observatory attracts mathematicians as well as astronomers from the whole world. City palace is perfect blend of all three excellent styles (Mughal, Rajput and European). Another palace, Hawa Mahal is popular all over world for it magnificent architecture. You will be taken through pink rose garden as well business centers of Jaipur. A tour of Jaipur is not complete without shopping. Jaipur is famous for clothes, carpets, precious and semi-precious stones and jewelry and various handicrafts made of wood, metals, etc. and also for silk paintings and miniatures. The transport is at your disposal with-in the city limits. Overnight in Jaipur.

This morning, you will be transferred from Jaipur to Agra enroute visiting Fatehpur Sikri, built in the 16th century by Emperor Akbar. Fatehpur Sikri holds exceptional testimony to Mughal civilization and is one of well-known UNESCO World heritage site of India and has various historical monuments. You will visit the Jama Masjid, followed by the Tomb of Salim Chishti, the five storied Panch Mahal and Buland Darwaza a graceful monument and stupendous piece of beautiful architectures. It is central portico with a total of three arched entrances and is locally known as Horseshoe gate. You will visit the other graceful buildings of this place such as Ibadat Khana, Mariam-uz-Zamani's palace, Naubat Khana and Birbal's house. You will be driven to Agra where you have the afternoon at leisure.The transport is at your disposal with-in the city limits. Overnight is in Agra.

Agra the former capital of Hindustan is a city on the banks of the river Yamuna. Agra is a major tourist destination of India and a part of the Golden Triangle tourist circuit along with Delhi and Jaipur. Agra also known as Akbarabad went through its peak during the time of Mughals and was the capital of under the Mughal rulers Akbar, Jahangir and Shahjehan. In the morning visit of Agra, you will be taken to Taj Mahal, one of the wonders of the world. This beautiful building is elegantly built with white marble by the Mughal Emperor Shah Jahan between the years 1631 to 1648 and it was built in the memory of his favorite beloved Queen Mumtaz Mahal. Standing majestically on banks of Yamuna River, this breathtaking, immensely beautiful monument is synonymous to romance and love. TAJ MAHAL IS CLOSED ON FRIDAYS. Your next stop Agra Fort is a UNESCO World Heritage Site and known for its architectural structure and was built in the 16th century during the Mughal Empire. This place comprises of several fairy-tale palaces like Khas Mahal and Jahangir Palace. Over here you will also get a chance to see Diwan-e-Aam and Diwan-e-Khas, which are also known as private audience hall and public audience hall. Afternoon can be spent visiting more places of interest or shopping. Agra is famous for inlaid marble work and handicrafts made of marble, wood and metal. The transport is at your disposal with-in the city limits. TAJ MAHAL IS CLOSED ON FRIDAYS. Overnight is in Agra.

This day you will be transferred to Agra rail-station in time for your Jhansi train. Arrive Jhansi and drive to Khajuraho. On your arrival in Khajuraho, you will be assisted in check-in at your hotel. Khajuraho is known for its erotic and beautiful temples. These temples were constructed by the Chandelas during 950 AD to 1050 AD. After the period of Chandelas, these temples were forgotten and covered with dense palm-date trees. The name Khajuraho comes from the date trees known as Khajur trees in Hindi. In the year 1838, Capt. T.S. Burt and an engineer from British army re-discovered this place. Rest of the day is at leisure. Overnight is in Khajuraho.

Your morning visit of Khajuraho will take you to the different temples. The Khajuraho sight-seeing will take you to temples like Chaunset Yogini Kali Temple, Bharatji or Chitragupta temple that is composed of magnificent 11 headed pictures of Lord Vishnu, Lakshmana Temple, Mahadev Temple, Nandi & Vishvanath Temples and Shiva Visha Temple. The Parasvanath Temple of Khajuraho is the only Jain temple that still exists. The Javeri Temple is dedicated to the Hindu Lord Vishnu. The other temples you can visit are dedicated to Lord Brahma, Lord Adinath and Yamuna. Afternoon is at leisure. Late evening you will be transferred to rail-station in time for your Varanasi train. (This train does not run daily). Overnight is on board the train.

Your morning visit of Khajuraho will take you to the different temples. The Khajuraho sight-seeing will take you to temples like Chaunset Yogini Kali Temple, Bharatji or Chitragupta temple that is composed of magnificent 11 headed pictures of Lord Vishnu, Lakshmana Temple, Mahadev Temple, Nandi & Vishvanath Temples and Shiva Visha Temple. The Parasvanath Temple of Khajuraho is the only Jain temple that still exists. The Javeri Temple is dedicated to the Hindu Lord Vishnu. The other temples you can visit are dedicated to Lord Brahma, Lord Adinath and Yamuna. Afternoon is at leisure. Late evening you will be transferred to rail-station in time for your Varanasi train. (This train does not run daily). Overnight is on board the train.

Your early morning boat excursion on the river Ganges will take you the different ghats. Two of most renowned ghats, Manikarnika and Harishchandra ghats, which are frequented by hundreds of devotees. These two ghats are quite famous not only for taking a holy dip, but also for cremation purposes. It is strongly believed by Hindus that whoever dies in Varanasi and gets cremated on bank of river Ganga achieves salvation, thereby releasing him form this birth cycle. You may witness numerous funeral pyres burning around in these ghats. Afternoon is at leisure or an optional visit to Sarnath is quite interesting. Sarnath was the deer park where Buddha gave his first sermon after attaining enlightenment where he taught of the four noble truths. Later in the evening, transfer to rail-station in time for your Delhi train. Overnight is onboard the train.

On arrival in the morning, you will be transferred to your hotel. You have a free day in Delhi. Or you could opt for additional visits of Delhi. You could visit Swaminarayan Akshardham which is one of the world's largest temple complexes and built from Rajasthani pink sandstone and Italian marble. In this Hindu temple complex, there are statues of Swaminarayan, Sita Ram, Radha Krishna, Shiva Parvati, and Lakshmi Narayan. The main temple was built as per Vastu and Pancharatra Shastra and the main monument has carved details of flora, fauna, dancers, musicians, and deities. The temple has 234 pillars, nine domes, 20,000 idols of sages and 148 of full sized elephants. Yagnapurush Kund is a larges step well with a musical fountain. A short boat ride takes you through 10,000 years of Indian history. Overnight is in Delhi.

Today morning you will be transferred to airport for your return/onward journey. END OF THE TOUR.