Golden Triangle Travel with Udaipur lets you roam and click pictures around the most beautiful lakes you have ever seen. Udaipur known as the city of lakes is extremely beautiful and is full of fascination. It will be an unforgettable family tour which usually starts from the capital city of Delhi. Udaipur is the historical capital of Mewar and is also known as the most romantic spot. Travel to India Golden Triangle with Udaipur will simply be incomplete without visiting the most beautiful lakes including Lake Pichola, Fateh Sagar lake, and Rangsagar etc. 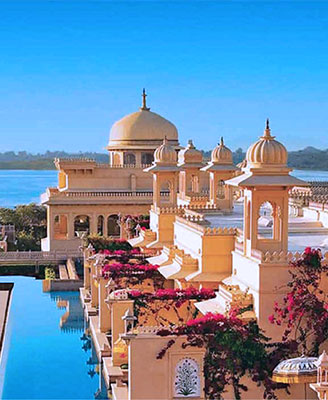 On your arrival in Delhi, you will be met by our representative and transferred to hotel. Delhi was the capital of Indraprastha and capital of the Pandavas during the Mahabharata. This magnificent city has been inhabited from the 6th century BC and has been a capital of many kingdoms. It has been destroyed and rebuilt many times and is called the "city of cities". Delhi's culture has been influenced by its different rulers and the city is full of beautiful monuments. The Mughal rulers influenced the food habits of the residents and Mughlai cuisine originated here. Due to the proximity of different states, all festivals are celebrated here. Old Delhi is a maze of small lanes and old buildings and New Delhi has large road with huge buildings. Delhi is the capital of India and is the hub for politics. Your morning tour starts with Old Delhi, built by the Mughal emperor Shah Jahan in 1639 AD. You will visit the Raj Ghat where father of our nation Mahatma Gandhi was cremated. You will be visiting the museum that was built to commemorate him. You will be driven past the iconic Red Fort and Chandni Chowk, a very popular and a busy market in Old Delhi to the next stop - Jama Masjid, one of the iconic, historic and largest mosques in India - built by Shah Jahan. A rickshaw ride in Chandni Chowk could be quite interesting as this part of the city is quite crowded as it is full of shops. These numerous shops sell delicious mouth-watering food, clothes, jewels, etc. and are virtually a shopper's paradise. In the afternoon, you will visit Qutub Minar, touted as India's largest Minaret. Qutub Minar, a UNESCO World Heritage Site, was built in 1192 by Turk ruler Qutub-Ud-Din Aibak. You will then move forward to Humayun's tomb, yet another UNESCO world heritage site. Your next stop is India Gate, built in memory of the Unknown Soldier. You will be driven past the Parliament House, President's House and other Government Secretarial Buildings, to your final destination which will be Lakshminarayan Temple, a temple dedicated to Lakshmi and Lord Narayana. Overnight in Delhi.

You will be transferred to the airport in time by road from your Udaipur flight. On your arrival in Udaipur, you will be transferred to your hotel. Udaipur known as the City of Lakes, or the Venice of the East was the historic capital of the kingdom of Mewar and founded by Rana Udai Singh in 1559. The legendary Maharana Pratap was born in Udaipur who fought against Emperor Akbar in 1576 and is remembered for his bravery. Maharana means the Great Warrior, and the one from Udaipur is the head of all the Rajput clans. In the 12th century the Parihara prince of Mandore awarded the title of Rana to the Prince of Mewar. The rulers from this dynasty are called Suryavanshis (descendents of the Sun) and have the Sun as their insignia. A stay in the Lake Palace hotel situated in the middle of a lake is like a dream. The transport is at your disposal with-in the city limits. Overnight in Udaipur.

In the morning, your tour starts with the City Palace, situated on the bank of Pichola Lake. This Palace was constructed by Maharana Udai Mirza Singh in 1559 A.D. Your next stop is the Jagdish Temple built by Maharana Jagat Singh. The architecture of this temple is based on Indo-Aryan style and is dedicated to Lord Vishnu and is one of the biggest shrines of Udaipur. You will be taken on a drive around Fatehsagar Lake, built in 1678 by Maharana Fateh Singh. Your next stop will be at Bhartiya Lok Kala Mandir located near Chetak Circle. It is one of most renowned museums of Udaipur, exhibiting the dazzling gathering of folk articles of Rajasthan. Your final destination will be at Sahelion ki Bari (Queen's resort for her friends). Afternoon is at leisure for discovering the various bazaars. The transport is at your disposal with-in the city limits. Overnight in Udaipur.

Early in the morning, you will be driven to Jaipur. Jaipur, also known as the pink city is the capital of Rajasthan. Many captivating palaces are present here having breathtaking design and architecture. In the 18th century Prince of Wales had visited Jaipur and the entire city was painted in pink color and due to these pink buildings the city is known as the pink city. Origin of Jaipur lie 260 years back. It was built by Maharaja Jai Singh and Jaipur got its name from this king. The rest of the day could be spent visiting the Jaipur bazaars or walking down the crowded colorful streets. The transport is at your disposal with-in the city limits. Overnight is in Jaipur.

The morning journey starts from Amer fort also known as Amer Palace, the earlier capital of Jaipur. This magnificent fort was constructed in red sand-stone and marble by Raja Man Singh and is divided into four sections each with a courtyard. The main entrance gate is Surajpol having a fascinating architecture. Near the Ganesh Gate, there is a temple dedicated to the Goddess Sila Devi. The Diwan-e-Aam - hall of public audience, Diwan-e-Khas - hall of private audience, Sheesh Mahal - palace of mirrors and Sukh Niwas are quite beautiful. At the Sukh Niwas, a pleasant climate is created by winds that blow over a water cascade. You could ascend the fort by walking up the steps or on an elephant's back or in jeeps. In Jaipur you will be taken to Maharaja City Palace, a royal palace with seven storey as well as Jantar Mantar, the observatory. This wonderful observatory attracts mathematicians as well as astronomers from the whole world. City palace is perfect blend of all three excellent styles (Mughal, Rajput and European). Another palace, Hawa Mahal is popular all over world for it magnificent architecture. You will be taken through pink rose garden as well business centers of Jaipur. A tour of Jaipur is not complete without shopping. Jaipur is famous for clothes, carpets, precious and semi-precious stones and jewelry and various handicrafts made of wood, metals, etc. and also for silk paintings and miniatures. Afternoon is at leisure. The transport is at your disposal with-in the city limits. Overnight is in Jaipur.

This morning, you will be transferred from Jaipur to Agra enroute visiting Fatehpur Sikri, built in the 16th century by Emperor Akbar. Fatehpur Sikri holds exceptional testimony to Mughal civilization and is one of well-known UNESCO World heritage site of India and has various historical monuments. You will visit the Jama Masjid, followed by the Tomb of Salim Chishti, the five storied Panch Mahal and Buland Darwaza a graceful monument and stupendous piece of beautiful architectures. It is central portico with a total of three arched entrances and is locally known as Horseshoe gate. You will visit the other graceful buildings of this place such as Ibadat Khana, Mariam-uz-Zamani's palace, Naubat Khana and Birbal's house. Later you will be driven to Agra. Afternoon is at leisure. The transport is at your disposal with-in the city limits. Overnight is in Agra.

Agra the former capital of Hindustan is a city on the banks of the river Yamuna. Agra is a major tourist destination of India and a part of the Golden Triangle tourist circuit along with Delhi and Jaipur. Agra also known as Akbarabad went through its peak during the time of Mughals and was the capital of under the Mughal rulers Akbar, Jahangir and Shahjehan. In the morning visit of Agra, you will be taken to Taj Mahal, one of the wonders of the world. This beautiful building is elegantly built with white marble by the Mughal Emperor Shah Jahan between the years 1631 to 1648 and it was built in the memory of his favorite beloved Queen Mumtaz Mahal. Standing majestically on banks of Yamuna River, this breathtaking, immensely beautiful monument is a synonymous to romance and love. Your next stop Agra Fort is a UNESCO World Heritage Site and known for its architectural structure and was built in the 16th century during the Mughal Empire. This place comprises of several fairy-tale palaces like Khas Mahal and Jahangir Palace. Over here you will also get a chance to see Diwan-e-Aam and Diwan-e-Khas, which are also known as private audience hall and public audience hall. TAJ MAHAL IS CLOSED ON FRIDAYS. Agra is famous for inlaid marble work and handicrafts made of marble, wood and metal. Later you will be transferred from Agra to Delhi airport in time for your return flight. As most of the flights depart after mid-night, accommodation is not included in Delhi.Depart for your return/onward journey. END OF THE TOUR.