This is just a two day tour of Gwalior city in which you cover each and every nook and corner of the city. Visit the Gwalior fort which was considered as one of the strongest forts of the northern India. Then there is Jai Vilas Palace which was the residence of Maharaja of Gwalior, Jayairao Scindia. The palace has European influences. Man Mandir Palace is a brilliant palace which showcases beautiful designs as well as carvings. Another piece of archaeological importance in Gwalior is Gujari Mahal which was constructed by Maharaja Man Singh way back in 15th century. 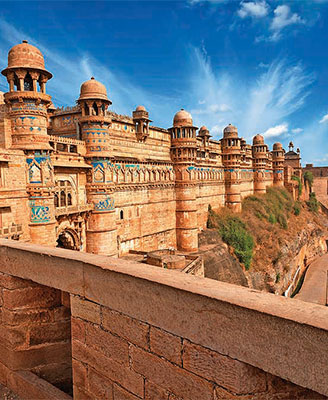 Arrive Gwalior & transfer to hotel. Gwalior, a historical town renowned for the sacred temples, outstanding palaces, as well as glorious monuments was founded by the King Surajesan. The legend is that Prince Suraj Sen lost his way in the jungle. On meeting a sage Gwalipa the Prince asked for water and was led water which quenched his thirst as well as cured him of leprosy. In return, the sage asked him to construct a wall to protect the sages from wild animals. The Prince obliged and named the place Gwalior after the sage. Gwalior is the birth-place of world class musician Tansen and every winter a huge cultural festival is organized in memory of Tansen, which attracts music lover from across the world. In the afternoon, you will taken for a Gwalior sight-seeing. You will be taken to the Man Mandir from the 16th century, the Gujari Mahal (today an archaeological museum), The fort, Temples of Sas-Bahu, Teli Ka Mandir, Jai Vilas Palace, Tomb of Gaus Mohammad and the Mausoleum of Tansen. Overnight is in Gwalior.

END OF THE TOUR.