This 5 day Gwalior Orchha Extension Tour is a wonderful trip where you can explore the glory of the ancient India to the fullest. From visiting the Sun Temple, Saas Bahu Temple, Jai Vial Palace, Man Mandir Palace and Tomb of Ghaus Mohammad & Tansen in Gwalior to checking out Jhansi Fort, Datia Fort and Jain Temple of Sonagir in Orchha, this tour has brilliance packed in span of just few days. The tour concludes with visit to Khajuraho where Sheesh Temple, Rai Praveen Mahal, Ram Raja Temple, Raja Mahal, Jehangir Mahal, Orchha Chattris etc are a must visit. 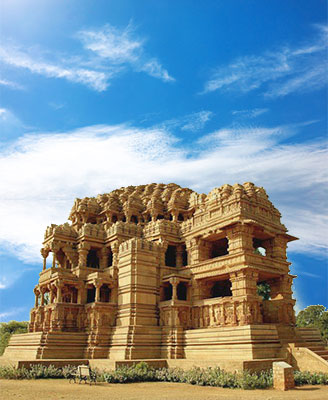 Arrive Gwalior & transfer to hotel. Gwalior, a historical town renowned for the sacred temples, outstanding palaces, as well as glorious monuments was founded by the King Surajesan. The legend is that Prince Suraj Sen lost his way in the jungle. On meeting a sage Gwalipa the Prince asked for water and was led water which quenched his thirst as well as cured him of leprosy. In return, the sage asked him to construct a wall to protect the sages from wild animals. The Prince obliged and named the place Gwalior after the sage. Gwalior is the birth-place of world class musician Tansen and every winter a huge cultural festival is organized in memory of Tansen, which attracts music lover from across the world. In the afternoon, you will taken for a Gwalior sight-seeing. You will be taken to the Man Mandir from the 16th century, the Gujari Mahal (today an archaeological museum), The fort, Temples of Sas-Bahu, Teli Ka Mandir, Jai Vilas Palace, Tomb of Gaus Mohammad and the Mausoleum of Tansen. Overnight is in Gwalior.

Drive to Orchha. Orchha's grandeur has been captured in stone, frozen in time & a rich legacy to the ages. For, on this medieval city, the hand of time has rested lightly: the palaces and the temples built by its Bundela rulers in the 16th and 17th century retain much of their pristine glory. Jahangir Mahal, The Orchha town has numerous temples and tombs and the fort has plenty of cenotaphs. The transport is at your disposal with-in the city limits. Overnight is in Orchha.

The morning Khajuraho sight-seeing will take you to temples like Chaunset Yogini Kali Temple, Bharatji or Chitragupta temple that is composed of magnificent 11 headed pictures of Lord Vishnu, Lakshmana Temple, Mahadev Temple, Nandi & Vishvanath Temples, Shiva's Visha Temple and Lakshmana Temple. The Parasvanath Temple of Khajuraho is the only Jain temple that still exists. The Javeri Temple is dedicated to the Hindu Lord Vishnu. The other temples you can visit are dedicated to Lord Brahma, Lord Adinath and Yamuna. The transport is at your disposal with-in the city limits. Overnight is in Khajuraho.

END OF THE TOUR.