This 5 day tour of Central India covers key cities of Gwalior, Khajuraho, Orchha and Varanasi. Khajuraho is popular for its erotic as well as beautiful temples constructed by the Chandela rulers. Visit the famous Chitragupta temples which has 11 headed picture of Lord Vishnu, Chaunset Yogini Kali Temple, The Parasvanath Temple, Mahadev Temple to have a glimpse of the glorious past of this city. Orchha town also takes prides in its numerous temples and tombs. Gwalior city stands testimony to brilliant era of King Surajesan. Visit Varanasi which is one of the oldest cities of our ghats. Take a dip at the holy ghats. Manikarnika ghat has funeral pyres burning endlessly. 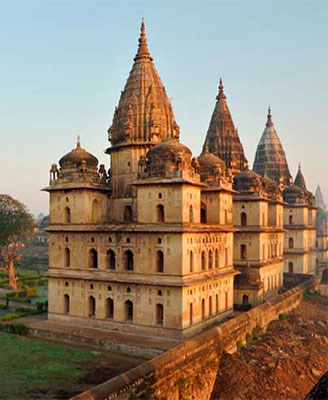 Arrive Gwalior & transfer to hotel. Gwalior, a historical town renowned for the sacred temples, outstanding palaces, as well as glorious monuments was founded by the King Surajesan. The legend is that Prince Suraj Sen lost his way in the jungle. On meeting a sage Gwalipa the Prince asked for water and was led water which quenched his thirst as well as cured him of leprosy. In return, the sage asked him to construct a wall to protect the sages from wild animals. The Prince obliged and named the place Gwalior after the sage. Gwalior is the birth-place of world class musician Tansen and every winter a huge cultural festival is organized in memory of Tansen, which attracts music lover from across the world. In the afternoon, you will taken for a Gwalior sight-seeing. You will be taken to the Man Mandir from the 16th century, the Gujari Mahal (today an archaeological museum), The fort, Temples of Sas-Bahu, Teli Ka Mandir, Jai Vilas Palace, Tomb of Gaus Mohammad and the Mausoleum of Tansen.. Overnight is in Gwalior.

Drive to Orchha. Orchha's grandeur has been captured in stone, frozen in time & a rich legacy to the ages. For, on this medieval city, the hand of time has rested lightly: the palaces and the temples built by its Bundela rulers in the 16th and 17th century retain much of their pristine glory. Jahangir Mahal, The Orchha town has numerous temples and tombs and the fort has plenty of cenotaphs. The transport is at your disposal with-in the city limits. Overnight is in Orchha.

Drive to Khajuraho. Transfer to hotel. Khajuraho is known for its erotic and beautiful temples. These temples were constructed by the Chandelas during 950 AD to 1050 AD. After the period of Chandelas, these temples were forgotten and covered with dense palm-date trees. The name Khajuraho comes from the date trees known as Khajur trees in Hindi. In the year 1838, Capt. T.S. Burt and an engineer from British army re-discovered this place. The afternoon Khajuraho sight-seeing will take you to temples like Chaunset Yogini Kali Temple, Bharatji or Chitragupta temple that is composed of magnificent 11 headed pictures of Lord Vishnu, Lakshmana Temple, Mahadev Temple, Nandi & Vishvanath Temples, Shiva's Visha Temple and Lakshmana Temple. The Parasvanath Temple of Khajuraho is the only Jain temple that still exists. The Javeri Temple is dedicated to the Hindu Lord Vishnu. The other temples you can visit are dedicated to Lord Brahma, Lord Adinath and Yamuna. The transport is at your disposal with-in the city limits. Overnight is in Khajuraho.

Transfer to airport to board flight for Varanasi. Arrive in Varanasi & transfer to hotel. The rest of the day is at leisure to discover the city or visit Sarnath. The evening Arti at the River Ganges Ghats is worth watching. Or a stroll in the busy bazaars of Varanasi also called Benaras or Banaras or Kashi will be quite interesting. Varanasi is said to be the oldest living city in the world, dating back to 5000 years. It has been the cultural and spiritual capital of North India for years. The belief of Hindus is that death in Varanasi leads to salvation. Varanasi is also known as the holy city of India or the city of temples, or the city of learning and also as the oldest living city on earth. Overnight is in Varanasi.

Your morning boat excursion on the river Ganges will take you to the different ghats. Two of most renowned ghats, Manikarnika and Harishchandra ghats, which are frequented by hundreds of devotees. These two ghats are quite famous not only for taking a holy dip, but also for cremation purposes. It is strongly believed by Hindus that whoever dies in Varanasi and gets cremated on bank of river Ganga achieves salvation, thereby releasing him from this birth cycle. You may witness numerous funeral pyres burning around in these ghats. Later you will be transferred to Varanasi airport in time for your flight. END OF THE TOUR.