This is an amazing 10 day tour where you get to see cities such as Varanasi which is one of the most pious city for Hindus, Bodh Gaya- the place where Lord Budhha attained enlightenment under the Bodhi tree, Yangon- largest city in Myanmar, home to different pagodas and temples, Bagan- Place of Anand Temple, Yangon- The city of golden Pagoda, Kyaikhtiyo- a place where Golden Rock rests on hair of Lord Buddha and Bago where you will see Shwemawdaw Pagoda. This tour takes your level of consciousness to a next level. This untamed ancient country leaves you with memories to cherish for a lifetime. 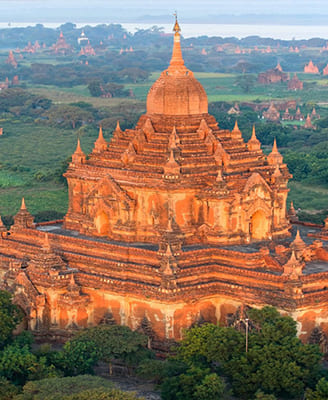 As you wander the city of Varanasi, it is like watching a phantom enchant on the dance floor. The whole city is doused in mystique, and no two seconds are ever the same as the cycle of life and death plays out on labyrinthine lanes. An exotic sight appears before you, and then it's gone. Turn around, and there's another. Funeral processions weave through the streets as they carry bodies wrapped in white cloth and flowers. Headed to the Burning Ghat, the most revered funeral place in the Hindu religion, the holy babas walk about the city, eyes lost in the haze. Great lines of pilgrims enter the temple as they wander beneath the archways adorned by elephant and monkey gods. It's often said that India is an overwhelming experience for the senses. Varanasi, the holiest Hindu city in the world, is where this feeling is magnetized. But before your wanderings begin, your guide will pick you up at the airport and guide you to your luxury hotel on the edge of the city. Take your time and allow the city unfold from your rooftop terrace; children fly their kites as the smells of incense float through the air with the passing shouts of chai wallahs (sellers). Your guide will take you through the maze-like alleys, most of them barely wide enough for two cows to pass, which causes a strange problem when the cows decide to stop and lie on the ground. There are countless spiritual sites in Varanasi, but for today, the tour will be about getting your bearings to take in the unending enchantment of the city. As well as walking through the maze, your guide will know a couple of excellent spots to watch the world roll past with a fresh fruit smoothie in hand.

The mystique of the city intensifies as you approach the River Ganges. Dead bodies can be seen burning at the Burning Ghat, a place with a surreal atmosphere and a remarkable lack of smell. Hindus believe that being burnt here is the ultimate send off, yet you never detect the whiff of burning flesh, despite the dozen or more bodies in various burnt states. Nearby temples are a place of meditation and spiritual tales, their ambiance enhanced by the wild monkeys that jump around and the soft chants that emerge from the small rooms. However, the Ganges isn't just a place for religion, it's also a place for everyday life! Take your boat cruise to see women as they wash their vibrant saris in the shallows; men bath in the murky water and the dust of everyday life is wiped away before they leave to pray in the temples. Return to the hotel for a relaxed afternoon as the rooftop provides a perfect spot to experience the sights of Varanasi from your special vantage point. As dusk arrives, return to the River Ganges and watch an enigmatic spiritual performance as holy men in white robes spin candles to the soft sound of drums. Seeing the locals all around you enhances the emotion that seems to envelop every piece of Varanasi. Follow the chants in in the light of dusk and head to a small temple for a private blessing ceremony to offer you good luck for the rest of your journey through India and Myanmar.

Bodh Gaya is Buddhism's most important place, located just north of Varanasi. An early morning drive takes you through a fusion of jungle and desert landscapes to lead you first to the iconic Mahabodhi Pagoda, where Buddha spent his last time as an ordinary person. Continuing the story is the Bodhi Tree, the place where Buddha achieved enlightenment. Both are wrapped in a surreal atmosphere and create a moving space for contemplation. It's a lot to take in, so you head next to the hotel for lunch and a few hours of quiet time. Into the afternoon, you're on the Niranjana River, also important in so many Buddhist stories. Next the Sujata Village, where you receive an endearing welcome at a local school as children jump in front of your camera lens with smiles that are the quintessence of rural India.

Some important Buddhist sites are scattered through the hills around Bodh Gaya. Rajgir was the first capital of the ancient Magadha Kingdom and the seat of Buddhist research for many centuries. Step inside the evocative stone of VenuvanaVihara, Buddhism's very first monastery that retains the ambiance of its history. Then drive to Nalanda, the world's oldest university that dates back centuries before Oxford and Cambridge. In the Sapataparni Cave, feel the spirituality around you as it echoes from the walls as if telling a story of when Buddha meditated here for six years. Then, wander up the slopes of Gridhakuta Hill, to the site where Buddha taught and spread his teachings. At all the sites, you will be greeted by locals and Buddhist pilgrims as they make the once in a lifetime journey to the origins of their beliefs. Much like Varanasi, there can often be too many impressions and experiences to take in. As in all significant spiritual places, you can document something through photos, but the memories you take away are the feelings of being immersed in the holy atmosphere of an ancient place.

A direct flight links Bodh Gaya to Yangon, the largest city in Myanmar. Connect with a domestic flight to Bagan, a spectacular ancient landscape of temples and pagodas. Some 2,300 of them are clustered on the plains as the beautiful sandstone structures hide expressive statues of Buddha. Again, there is so much to take in. Rather than focus on particular temples, your guided tour takes you onto the Central Plains, the mystical and dusty area that leaves you alone amongst the temples. Climb staircases to idyllic views over the pagodas to admire the 900-year-old murals on temple walls; marvel at the ornate sculptures that have survived since the late 10th-century. Travel by horse-drawn carriage and stop at a series of temples that capture the essence of Bagan's mystique to culminate in a sunset view over the Central Plains.

Bagan takes the breath away with its scale. The 2,300 temples are beyond comprehension no matter how many angles you take to observe it. Some rise with grandeur, like the white pinnacles of Ananda Temple. Others blur into the red hue of the earth as pagodas are etched with the faded glory of time. The real Bagan delight comes in the detail; triple-headed creatures line a 12th-century wall as stepped terraces adorned with sandstone sculptures lead to the many faces of Buddha filling different temples. Gold leaf facades shimmer in the sun as sand artists work in roofless monastery remains, and an elliptical atmosphere floats across the entire site. Today's full-day tour is on an e-bike to take you to a wide range of the World Heritage Site's most important landmarks, as well as those that are still important prayer sites for local villagers.

Shwedagon Pagoda changes color throughout the day; its golden facade reflects the angle of the sun. Sunset is the magical time to visit, aesthetically, and also atmospherically. Myanmar's most important Buddhist monument, thousands of locals file into the complex through the evening. Strands of Buddha's hair reside here, and various rooms are filled with the choral chanting of monks and city dwellers. They create a resonant harmony, a melody of tones that stretch beyond the gold of the pagoda. After a relaxed morning in Bagan, a direct flight brings you to Yangon for transfer to a five-star hotel in the old part of the city. You will have some free time to explore the colonial lanes, perfectly preserved in the ambiance of the early 20th-century. Travel next out to the iconic Swe Taw Myat Pagoda, where Buddha's teeth are located. By now, the sun will start to dip as you make your way to Shwedagon for its spectacular evening show.

Travel through rural Myanmar and coast past the traditional villages crafted from bamboo and palm fronds as you head to Kyaikhtiyo, where an immense rock glistens an otherworldly tone of gold. Precariously perched on the mountain and balanced in such a way it defies gravity, the rocks appears as if it's rolling down the hill, even though it's pointed towards the sky. Legend says that the Golden Rock rests on a strand of Buddha's hair, so it is an inspiring pilgrimage site for pilgrims. Hundreds, perhaps thousands of pilgrims, wind towards the rock, slowly ascending while as they meditate. Join the line for an unforgettable experience, the sense of spirituality floats like a carpet across the mountain slopes. Like many places on this itinerary, the spirituality and emotion elevates the scenic splendor and casts a spell that often leaves visitors transfixed. Your hotel is situated with views over the rock to continue the splendor of the day.

Sunrise is as hypnotic as sunset here, pilgrims wake and share their joy in visiting such a special Buddhist site. Take time over breakfast to wander beneath the rock once more to take in its ethereal tones. On the journey back to Yangon, visit the town of Bago, the 15th-century capital of the ancient Mon Kingdom. A 55-meter Buddha reclines outside of a temple; a four-seated Buddha waits with iconic tranquility as you wander through the golden hallways of the old palace of Kanbozathadi. Bago's most outstanding monument is the one that can't be missed as Shwemawdaw Pagoda rises 114 meters and is completely glazed in golden leaf as a contrast to the orange robes of monks who walk barefoot around its base. Return to Yangon in the late afternoon for an elaborate Burmese dinner to complete your intimacy with the country's culture.

Depart on your international flight from Yangon and leave the land of spirituality behind after ten days of immersion in its magic. Your guide will escort you to the airport, and you will leave with the indeliable memories of an untamed ancient land. END OF THE TOUR.