08 days pilgrimage travel package of Jagannath Dham. For the devout Hindus this is fabulous tour which spans a period of 8 days and covers cities of Kokata, Puri and Bhubaneshwar. Jagannath Puri is one of the most sought after destination which is primarily visited due to Jagannath Temple. Puri is basically a beach town and besides the Jagannth Temple you can see other places here such as Gundicha Ghar, Cihilika Lake and Puri beach. Bhubaneshwar is also an ancient city where you will see places like Lingaraj Temple, Rajarani Temple Nandankanan Zoological Park, Odisha State Museum etc. Kolkata presents int unique old world charm with sprinkles of modern lifestyle. 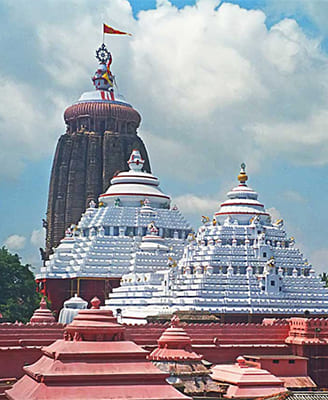 This day on arrival in Kolkata, also known as Calcutta you will be transferred to your hotel. Kolkata is an important commercial and cultural point in East India. In the 17th century, the Nawab of Bengal granted the East India Company a trading license. Kolkata was the Capital of India till 1911, under the British rule after which the Capital was shifted to Delhi. Kolkata is also called as the City of Joy and also the Cultural Capital of India. The Bengalis of Kolkata are known to be educated, cultured and soft spoken. The Bengali sweets of Kolkata are world famous, especially sweets made from milk. Durga Puja is celebrated with a lot of show and pomp. Bengal was home of famous personalities like Bankim Chandra Chattopadhyay, Rabindranath Tagore, Iswar Chandra Vidyasagar, Swami Vivekananda, Chaitanya, Ramakrishna, Prabhupada, Paramahansa Yogananda, etc. Rest of your day is at leisure. Overnight is in Kolkata.

The morning Kolkata sight-seeing will take you the most important Jain Temple dedicated to Parasvanath, the 23rd Jain Tirthankara. Devout Jains from all parts of India flock to the Temple precincts all round the year. The complex consists of four temples inside of it. The deity of Lord Sitalnathji is seated in the sanctum sanctorum, and his diamond-studded forehead is a major attraction. You will continue with your tour visiting the Victoria Memorial which is one of India's most beautiful monuments built between 1906 and 1921 in white marble. The memorial was the inspiration of Lord Curzon, who in 1901, felt that his lately departed Queen Empress, required a suitable monument to her memory. It houses paintings, manuscripts, and other objects of historic value in its Museum and Art Gallery (Closed on Mondays and National Holidays). You will drive past Howrah Bridge, Dalhousie Square, Fort Williams, Secretariat Building and Old Court House Street. Dalhousie Square named in the memory of Lord Dalhousie who was the Governor General of India from 1847 to 1856. But it was renamed as BBD Bagh (Binoy, Badal, and Dinesh) three patriotic sons of Bengal who attained martyrdom during India's struggle for independence. The Dalhousie Square is surrounded by some of Kolkata's most enduring Raj-era monuments like the magnificent GPO (General Post Office), the regal Raj Bhawan, the Town Hall, the St. John's Church and the Gothic style Writer's Building. In terms of heritage, no other city square is as rich as Dalhousie Square. Check out from your hotel is at noon. Afternoon is at leisure. Later in the evening you will be transferred to rail-station to board a Puri train. Overnight is onboard the train.

This morning on your arrival in Puri you will be transferred to your hotel. You have a day free in Puri to discover this religious town. Puri is one of the holiest places for Hindus and has many names like Jagannath Puri, Srikshetra, Shankhakshetra, Purusottama Puri, Neelachala, Neeladri, etc. Every Hindu would like to make a pilgrimage tour to four temples towns at least once in his life and Puri is one of them and the other three are Badrinath, Dwarika and Rameshwaram. Puri has one of the four Mathas (Hindu monastery) established by Adi Shankaracharya. The others are at Jyotirmath, Sringeri and Dwarika. Overnight is in Puri.

This day, you have a full day tour of Puri visiting the various religious places. Puri is one of the seven most holy places for Hindus in India whereas Varanasi is considered as the holiest of the seven holy cities. Puri is the only shrine where Radha, Lakshmi, Durga, Parvati, Sati and Shakti abode with Krishna. The Jagannath Temple is closed for non-Hindus. Thousands of pilgrims flock to Puri every year to participate in the Ratha Yatra (Festival of Chariots). Overnight is in Puri.

You have the entire day at leisure to explore the various places of interest and also the beach. The elaborate daily worship is attended by hundreds of people. Puri has many important festivals and events such as Rath Yatra, Dol Yatra, Jhulan Yatra, Vijayadashami, Pana Sankranti, Chandan Yatra, Snana Yatra, Anavasara, Nava Kalevara, etc. Millions of people attend the Rath Yatra or the Chariot festival which takes place in June. A procession of three huge chariots bearing the idols of Jagannath, Balabhadra and Subhadra go through the Bada Danda till their final destination the Gundicha Temple. Overnight is in Puri.

This morning, you will be transferred by road from Bhubaneshwar to Konark which is famous for its Sun Temple of 13the century or the Black Pagoda as it was built in black granite. The name Konark comes from the Sanskrit words Kona (angle) and Arka (Sun) and is dedicated to Surya the Sun God. The Temple is designed as a huge chariot of the Surya with twelve pairs of wheels, some of them 3 meters wide and pulled by seven horses. The temple which is in ruins is a World Heritage Site. Konark is home to the Konark Dance Festival devoted to the classical Indian dance forms, including Odissi. After the visit of Konark, you will proceed to Bhubaneshwar. Bhubaneshwar is the capital of Odisha and has a history of over 3,000 years. Bhubaneswar gets its name from Tribhubaneswar, meaning the Shiva who is the Lord of the Three World and was mentioned during the Kalinga War where Emperor Ashoka was shocked with the brutalities of war and shifted to Buddhism. Bhubaneswar known as the Temple City of India had over a thousand temples and some of the important temples are Lingered Temple, Muktesvara Temple, Rajarani Temple, and Ananta Vasudeva Temple. After visiting some of the temples, late evening you will be transferred to the rail station to board your Kolkata train. Overnight is onboard the train.

This morning, on your arrival you will be transferred to your hotel in Kolkata. Rest of your day is at leisure. Optionally, you could visit Kumartuli, Marble Palace and St. Paul's Cathedral Church. Kumartuli is a unique artisan village dates back 400 years, making it perhaps the oldest of its kind in the world. It is the lifeblood of Bengal's biggest festival and keeps the Puja fervor alive among Bengali communities in other countries. Around 250 artists with more than a 1000 assistants work here to produce 40,000 idols a year, including 3500 images of Durga. The Marble Palace houses an age-old art gallery and was built in 1855 with Italian marble. This art gallery personifies the earliest effort at collecting by a private individual (Closed on Mondays, Thursdays and National Holidays). St. Paul's Cathedral Church measures 71m in length 24m in width the spire rising 60m high. The interior has exquisite scriptural scenes. Above these are the two Florentine frescos. In the centre of the eastern sector is the magnificent alter piece. The massive gold-gilt plate presented by Queen Victoria to Bishop Wilson, and the western windows are of special interest. Check-out is 1200 hrs. Evening, you will be transferred to the rail-station in time for an overnight train for New Jalpaiguri. Overnight is in Kolkata.

This morning you will be transferred to the airport. Your Jagannath Dham pilgrimage package comes to an end.