Explore the natural habitat of Asian tigers and leopards. It will be an experience of a lifetime and do not miss this extension tour if you are visiting south of India. 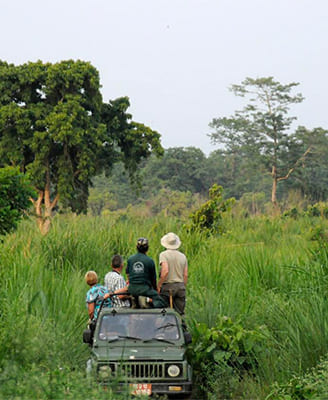 On arrival in Kathmandu, you will be transferred to your hotel. Kathmandu is the largest metropolis and capital city of Nepal. This city has indeed a lot to offer to its guests including a number of exotic attractions carrying full of historical importance as well as religious significance. Kathmandu has a rich history, spanning nearly 2000 years and has many religious and cultural festivities taking place here. Most of Nepalese follow Hinduism and Buddhism. Rest of the day is spent at leisure. Overnight is in Kathmandu.

Your tour starts with Durbar Square, the heart of Kathmandu, built between 12th to 18th centuries. This site displays brilliant architectural structures and comprises within itself numerous fortresses, temples, religious shrines, figurines, fountains, etc. Various striking structures built inside this square interestingly display a perfect amalgamation of ancient as well as modern style of architecture through its finely carved figurines and other stone engravings. Stone made lions stand on palace entrance, along with ancient inscriptions engraved on stone walls in various languages. Later you are taken to the renowned Mahadev and Parvati Temple, dedicated to Lord Shiva and Goddess Parvati. Next destination is Hanuman Dhoka, built by ancient monarchs, comprising of numerous palaces, shrines, etc. and spread across about 5 acres of land area with its courtyards built around middle years of 16th century. During the rule of King Pratap Malla in 17th century numerous sacred temples were installed, dedicated to various Hindu Gods and Goddesses. Other developments were made by Narayan Shah and the royal family which stayed here till later years of 19th century. Afternoon is free for visiting the various other monuments or excursion to the nearby-by places of interest. Overnight is in Kathmandu.

The entire day is at leisure in Kathmandu to give you the possibility of visiting the various nearby places of interest. Patan also known as Lalitpur is a large town across the Bagmati River from Kathmandu. Patan is famous for its handicrafts, statues, masks and jewelry. The places of interest in Patan are the Durbar Square, The Museum, Ashok Stupa and the various temples some of the which are - Degutale temple, Krishna temple, Shankar Narayan temple, Vishnu temples, Vishwanath temple, Bhimsen temple, Mahaboudha Temple, Machchhendranath temple, Golden Temple in Patan and Kumbheshwar Temple. Nagarkot surrounded by thickly forested hills of pine trees offers you magnificent sights of the Himalayan peaks at sunrise. On a clear day, you may be able to see the tip of Mt. Everest from Nagarkot. Dhulikhel offers you good views and a number of temples like Kali Temple, Bhagwati Temple, Hanuman Temple, etc to visit. Changu Narayan a small town offers you the oldest temple in Nepal of Lord Vishnu and a museum. Panauti is another old town full of ancient temples. The Indreswor Temple is a large pagoda style temple. Kakani offers you a good view of the valleys. Kirtipur meaning famed town" is and old small town and is inhabited by Newars. Boudhanath a UNESCO World Heritage Site has one of the largest Buddhist stupas in the world from the 5th century AD and is surrounded by many Tibetan Gompas. Namo Buddha with the Thrangu Tashi Yangtse Monastery is one of the holiest places for the Buddhists as the legend is that Buddha in a previous life sacrificed his body to a starving tiger and cubs. If you are the adventurous type Nepal offers you the possibility of trekking in the nearby mountains or you could always go for a rafting in the Himalayan Rivers. A flight to view the Mount Everest is highly recommended. Overnight is in Kathmandu.

Drive to Kathmandu airport to board flight for onward journey. No hotel on this day. END OF OUR SERVICES