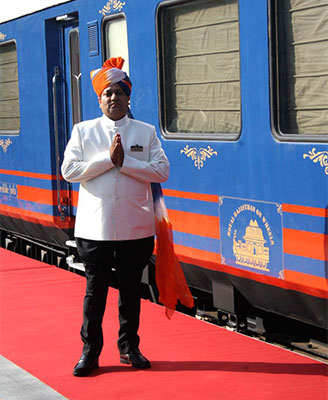 Depart from Delhi to Jodhpur. Dinner & overnight on Board.

Breakfast on board. Arrive Jodhpur. Morning sightseeing tour of Jodhpur - gateway to the desert beyond, home of the Rathores of Marwa. Visit the Fort, rising up a hilly scrap, built on the advice of a hermit, which overlooks the city in the image of a long sentinel. Inside the Fort are a number of palaces added by successive rulers. The cenotaphs of the former rulers are imposing and architecturally remarkable. Lunch at a hotel. Royal Rajasthan on Wheels departs for Udaipur. Dinner & Overnight on board.

Arrive Udaipur. Breakfast at a hotel. Morning, sightseeing tour of Udaipur, stopping first at City Palace. Here you will marvel at rooms with mirrored walls and ivory doors, colored glass windows and inlaid marble balconies; and the Peacock Courtyard. Also visit the lovely Sahelion-ki-Bari Gardens; the Jagdish Temple; and the local folk museum. Lunch at a hotel. Enjoy boat ride on Lake Pichola before returning on Royal Rajasthan on Wheels. Later visit Chittaurgarh. There is no place in Rajasthan with a history more romantic than that of Chittaurgarh. The centre of Rajput resistance against Mughal rule. Evening Tea with Sound and Light show at the Fort. Dinner at a hotel. Overnight on board.

Arrive Sawai Madhopur. Game viewing in the sanctuary by canter. Ranthambore Wildlife Sanctuary extends over an area of 392 sq kms of thick forests. The place abounds in scenic beauty, requisite refuge for both the carnivora and herbivora. The numerous valleys and flat hill tops form picturesque surroundings of the 13th century historical Ranthambore Fort. The Tiger and Leopard are the main predators found in this reserve. Breakfast at a hotel. Royal Rajasthan on Wheels departs for Jaipur. Morning excursion to Amber Fort. Make your ascent to the palace fortress on the gaily caparisoned elephant back. Tour the chambers and hallways of the palace which are famous for the excellence of their design and decoration. Afternoon tour of Jaipur known as "The Pink City of Rajasthan" Visit the unique Jantar Mantar Observatory, which was built in the 1700's, yet even today still looks futuristic or almost surrealistic; the City Palace and its Museum, the Hawa Mahal or the Palace of Winds. Return to train for tea and freshening up. Enjoy a drive of Jaipur by night followed by dinner at a Palace Hotel. Return to Palace on Wheels. Train departs for Khajuraho. Overnight on board.

Arrive Khajuraho. Breakfast onboard. Morning visit the Eastern group of temples which consists of 3 Hindu and 3 Jain temples, their proximity attests to the religious tolerance of the times in general and of the Chandela rulers in particular at leisure for own activities. After lunch, visit the most important and fascinating western group of temples. The temples of Khajuraho have been declared a 'world heritage' site by UNESCO in order to preserve the rich legacy of architecture, bequeathed to future generations by the Kings of the Chandela dynasty. These temples are famous for their intricate sculptures and erotic carvings that are one of the outstanding achievements of Indian art. Overnight on board.

Arrive Varanasi. Early morning take a short trip by country boat on the sacred river Ganges to see the Ghats and witness the living traditions of one of the world's oldest and most important religions. Pilgrims flock the Ghats to have a ritual bath and perform puja to the rising sun, following centuries old tradition. Breakfast at the hotel. Visit some of the many Hindu temples that line the river Ganges and stroll along the narrow lanes and bazaars full of shops selling, among other things, the world famous Benaras Silks. Lunch on board. Afternoon visit Sarnath 5 miles out of Varanasi one of the holiest Buddhist sites in the world, where Buddha preached his first Sermon in 590 B.C. Here you will witness the ruins of a once flourishing Buddhist monastery and then visit a fine Archaeological Museum which houses an excellent collection of Buddhist art and sculptures found at the site. The main attraction at this excellent Archaeological Museum is the superb capital from the Ashokan pillar. It has the Ashokan symbol of four back-to-back lions which has been adopted as the state symbol of modern India. Other finds from the site include many figures and sculptures from the various periods of Sarnath - Mauryan, Kushana, Gupta and later. (The museum is closed on Fridays). Ro yal Rajasthan on Wheels departs for Agra. Dinner & overnight on board.

Arrive Agra. Enjoy your breakfast on board. Enjoy sightseeing tour of Agra city visiting, the most perfect architectural monument in the world -The Taj Mahal. Taj Mahal is the mausoleum of Empress Mumtaz Mahal, the beloved spouse of Shah Jahan, who died in 1630. The Taj is remarkable for its perfect proportion and rich pietra dura, with minute details executed with great skill. The building, often styled "a dream in marble" is said to have taken at least 22 years (1631-1653) to build. Enjoy sound & light show. Dinner at a hotel. Royal Rajasthan on Wheels departs for Delhi. Overnight on board.

Arrive Delhi. Dis-embark after breakfast on board.